Ukraine – Overwhelmed by your amazing response 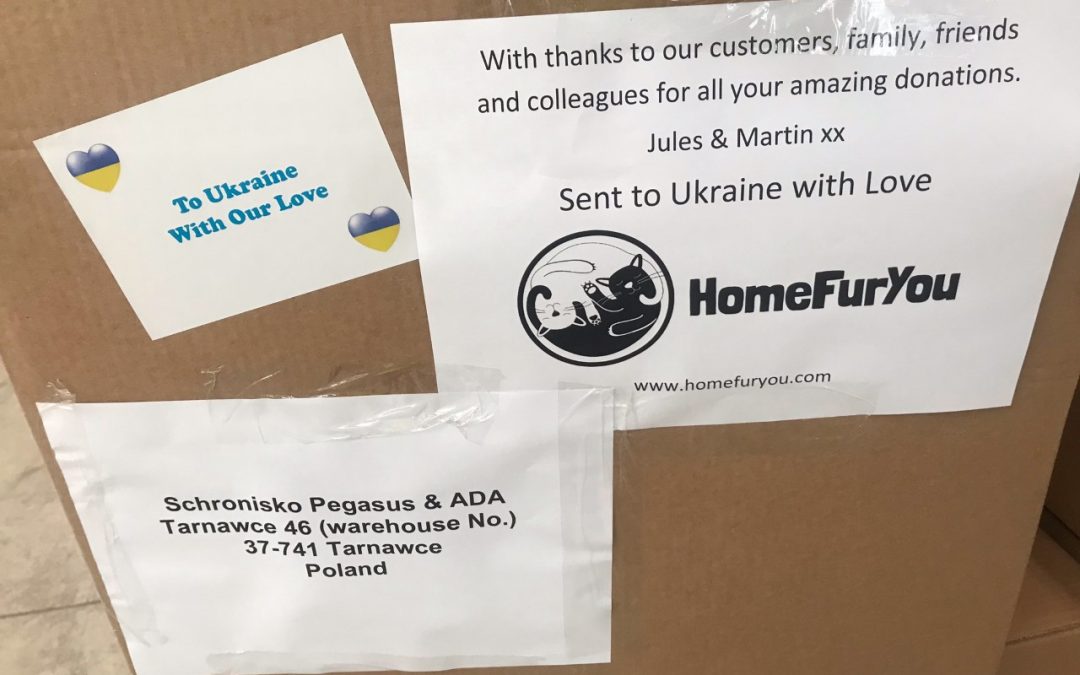 Who knew that just a few weeks ago at the end of February, the world would change forever. Ever since then, our screens have been full of harrowing images and the news bulletins have been depressing to say the least.

The Russian invasion of Ukraine has taken a terrible toll on the people living in that country, but we have all taken the people of this beautiful land to our hearts. Their passion and patriotism, their will to survive and their sense of togetherness is just awe inspiring.

Here at HomeFurYou, we wanted to play a small part (as have so many people, businesses and charities). We started by collecting clothes and food items from our customers and that of our sister company FitBizNow (run by Jules). The response was incredible. But then we felt we needed to address the suffering that was being caused to the animals of Ukraine. There were so many images of refugees escaping into Poland with their beloved cats and dogs. These, it turned out were the lucky ones. A lot of people had to run so quickly that they had to leave their pets behind. It was then that we heard of many charities on the Polish/Ukraine border that were rescuing these animals and taking them to shelters in Poland, Romania and Moldova.

HomeFurYou had to do something and so we sent out a message to all of our customers, families and friends on social media to give us their unwanted pet food, carriers, harnesses, leads, toys and cages. We expected a few boxes and maybe a small supply of food to send out to the needy. Instead, we quickly became inundated with so many items, either dropped off on our doorstep or collected by us around the Bedfordshire region.

A great friend of the business Karen Matthews, then spread the word on some of the Bedford and Milton Keynes social communities and shortly, our own houses were full up. We couldn’t get through our hallway and dining room for supplies! Other businesses got involved, from local vets to Dominos in Milton Keynes and in the end we packed up eight massive pallets of items and loaded them onto a container (supplied by a wonderful local farmer – Thomas Beazley). As we write, these pallets are being loaded onto a Polish lorry for onward distribution this weekend.

We’ve now made the decision to travel out to Poland and work at one of the animal reception centres later this month. I’ll be blogging on the ground to give you a flavour of where all of these items have ended up and how they’re being used to save lives.

HomeFurYou and FitBizNow have the best customers and the most amazing friends and family who have made all of this happen in such as short space time. We are truly humbled by the response from all of you.